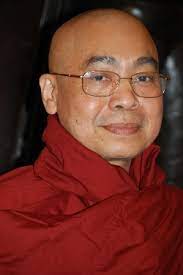 Sayadaw U Uttarañāṇa (U Ottaranyana) was born in Myanmar in 1949. He passed the higher examination in scriptural studies and was awarded several prestigious titles. From 1984 to 1986, he resided at the main Mahasi Meditation Center in Yangon as a practitioner and then as a meditation instructor. In 1992 he was awarded the academic title of Mahāganthavācakapaṇḍita for his religious and academic activities and in 2002, that of Aggamahāganthavācakapaṇḍita, and in 2011 that of Aggamaha Pandita from the Myanmar government. . He is currently the abbot of the Birmingham Buddhist Vihāra, where he teaches Majjhimanikāya, Pali grammar, Abhidhamma and vipassanā meditation.